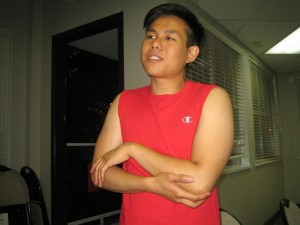 Structures of the shoulder blade:

The shoulder blade is a bony structure located on the upper back. It connects the upper arm to the chest wall. It has a fairly complicated structure.

Causes of a Broken Shoulder Blade

As previously mentioned, scapular fractures are typically caused by heavy force or direct trauma to the body. Some of the common causes include:

Symptoms of a Broken Shoulder Blade

The following symptoms are associated with a scapular fracture. However, the patient must still be diligently examined for other injuries or complications due to the heavy force.

Disclaimer: This article is for information purposes only and not meant to substitute for medical advice or formal training. To learn how to manage fractured legs and other broken bones in the body, enroll in First Aid Training.

Let us know if you liked the post. That’s the only way we can improve.
Broken Shoulder Blade 2013-08-12
Ibrar