Croup: Cause, Symptoms, and Treatment

Croup is commonly related to signs of respiratory infection. It is the infection of the larynx and the trachea, also known as the voice box and windpipe, respectively. It is a common malady of children, especially between the ages of three months and six years of age. However, its peak is said to be at two years of age.

Croup will generally last from five to six days, with symptoms most severe during the first two nights. Because it is commonly caused by viral infections, it is highly contagious to other children, as airborne droplets from an infected child’s cough may come in contact with other children. Most cases are considered mild and can be treated at home. However, in severe cases, hospitalization may be required. There have been cases of recurring croup among children.

There are different causes for croup. Some of the following include:

The first and most obvious symptom of croup is a cough, similar to that of a barking dog or seal, thus it is called a “barking” cough. Symptoms are often worst at night. The following are the less evident symptoms 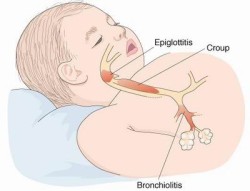 Very few children actually progress to serious airway obstruction. When a child experiences stridor during inspiration and expiration, has increased respiration rate, has trouble breathing or cyanosis of the skin around the nose, mouth and/ or fingertips, it may be time to see a doctor.

Children are especially prone to croup due to their small trachea and susceptible bronchial passages. As previously mentioned, croup can be managed at home. There is rarely a need for aggressive treatment.